Posted by Daz on 5/19/2019 to Beginner's Guide to BBQ
Recently we had a discussion about cooking pizza in a Kamado grill. The debate was about at what temperature should we cook our pizzas. Some say high temperature cooked pizza (650+ degrees) is the holy grail of pizza baking, that's with freshly made dough. Well, it is a skill to brag but not many of us have the time, patient and proper tools to make it that way. I love pizza and I've made thousands of pizzas while working at a Greek joint as a cook. You can cook any pizza, store bought or freshly made, at 450 degrees, to its perfection. Below are two pizzas cooked at two different degrees, both are Newman's thin crust, one cooked around 550 stone temperature and second around 450. You can see the results yourself. The 550 one got bottom cooked within 3~4 minutes while the top took 7 minutes. But the one cooked at 450 was baked perfectly. We used TempMaster Pro controller's Manual Fan feature and turned fan power to 100% to heat up the grill quickly and to monitor grill temperature.
For thin crust, it doesn't matter if it's store made dough or hand made, if the stone is over 600 degrees, you'll have to lift the dough up from the stone before the top turns brown. Yea dough comes many different ways and Neapolitan pizza is the holy grail of the pizza, but you can cook them at lower temp for the same results, just more consistently. The real goal to cook pizza right is the heat penetration from both sides should reach the middle at the same time.
First Pizza, Newman's Four Cheeses. 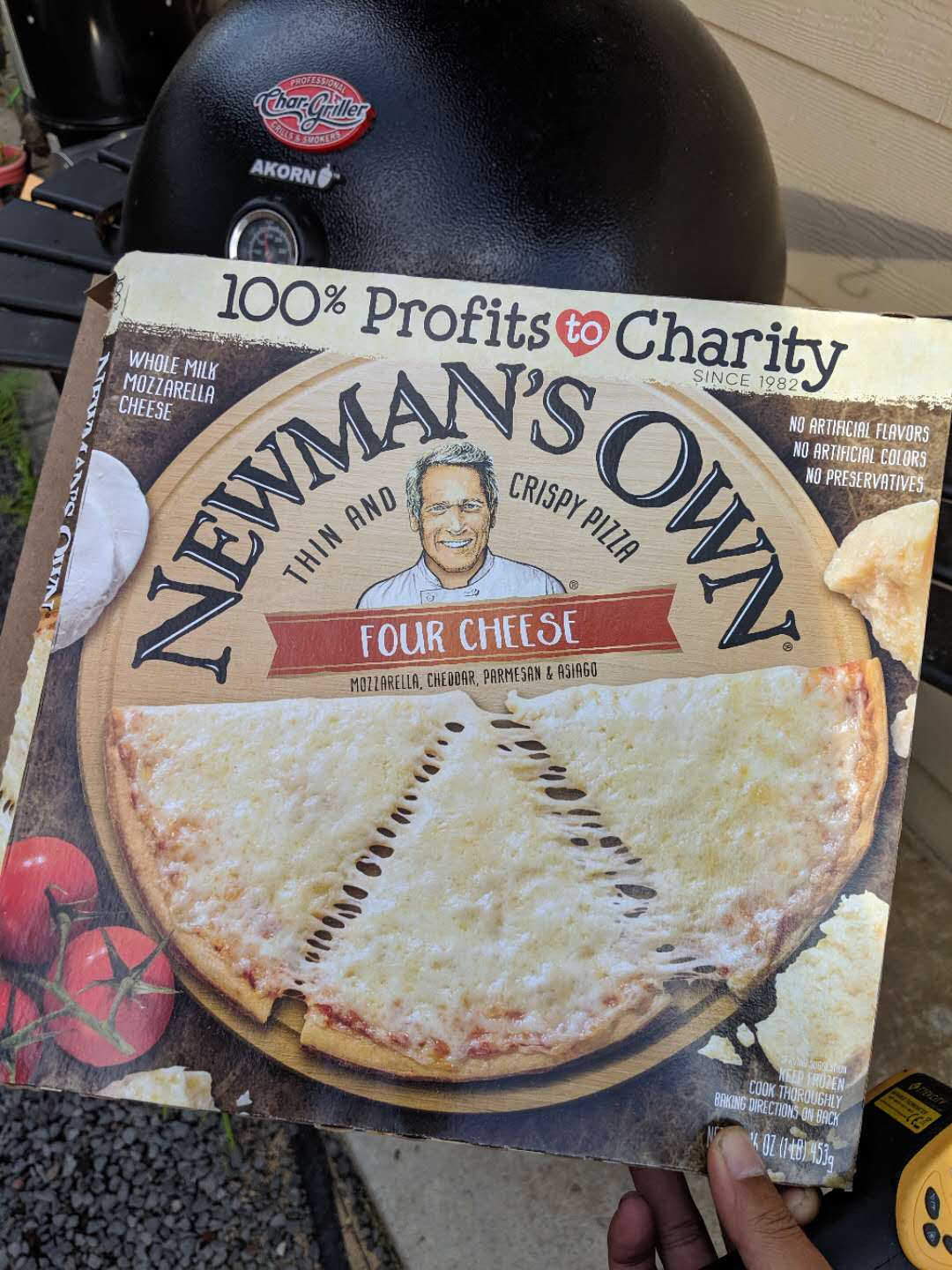 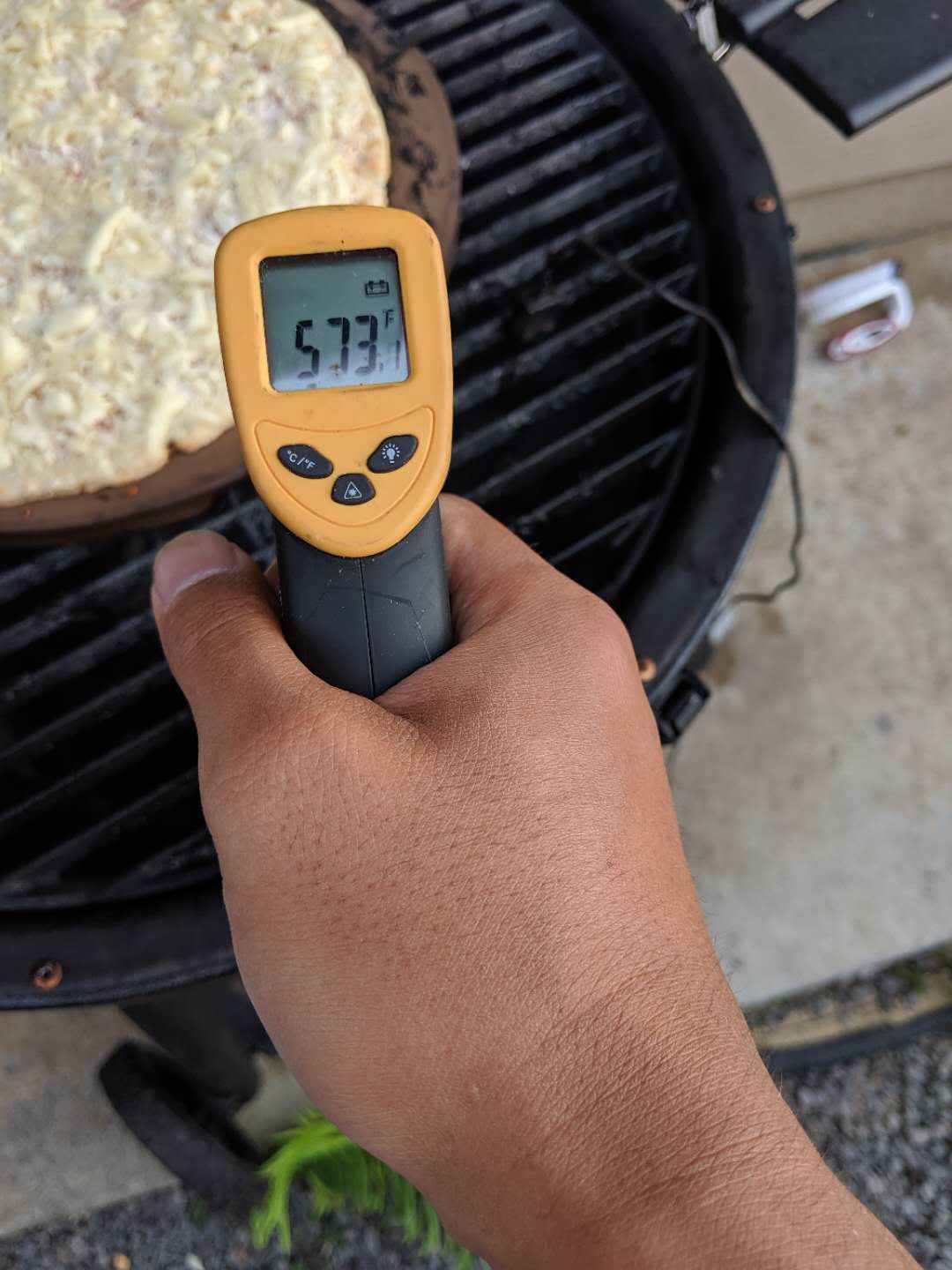 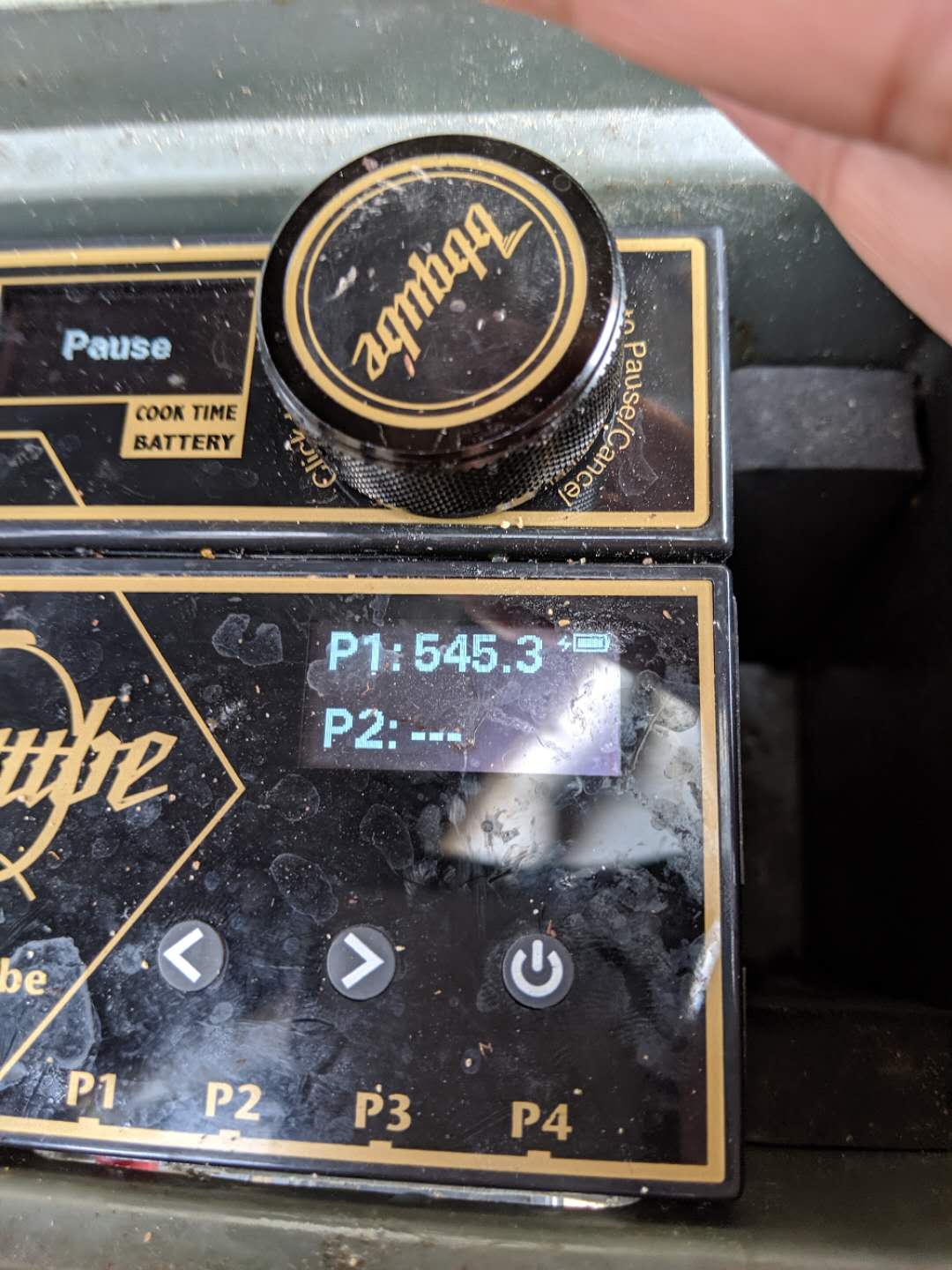 3~4 minutes after the pizza was placed on the stone.
Bottom is done now but the top needs more time. 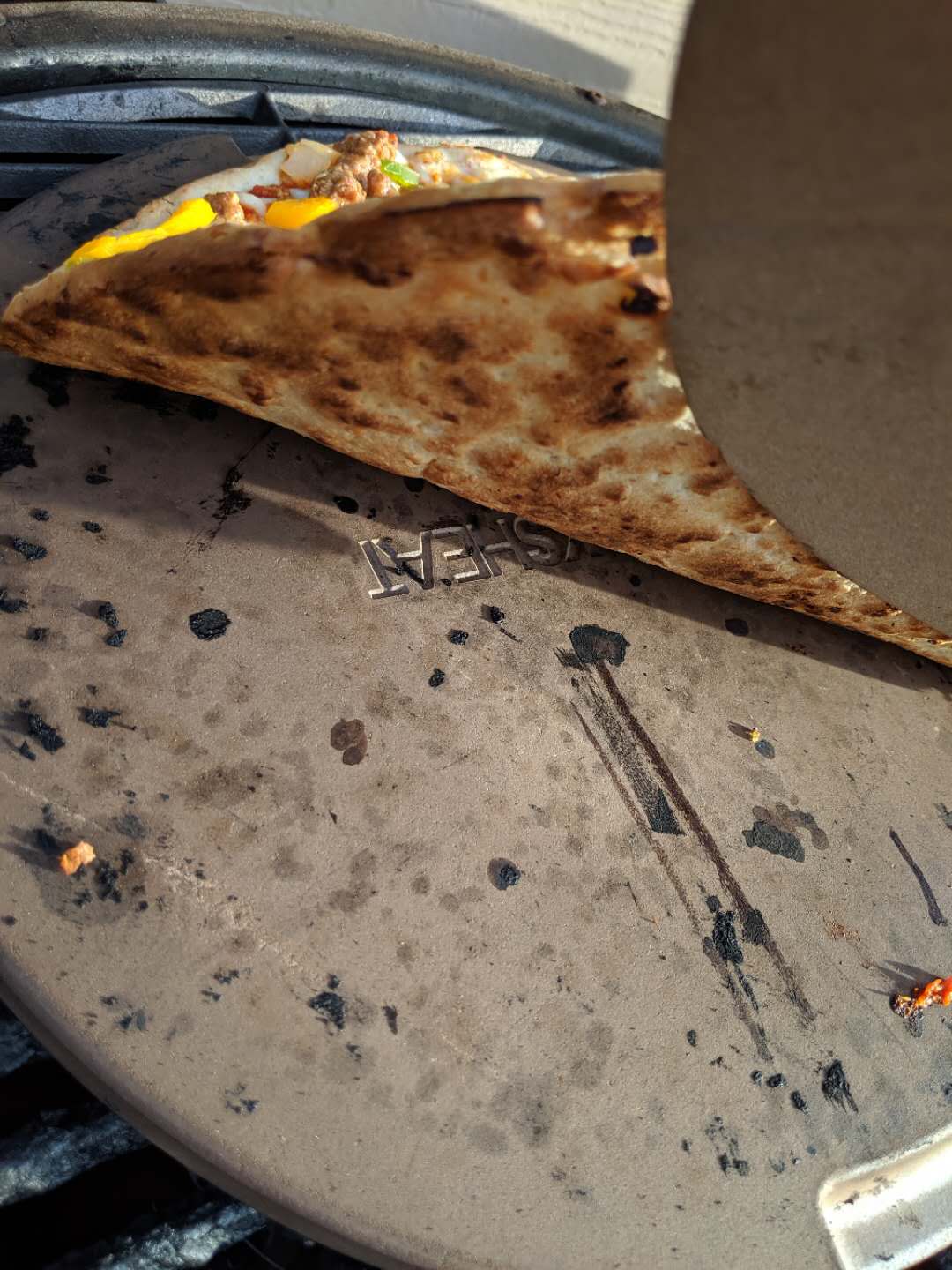 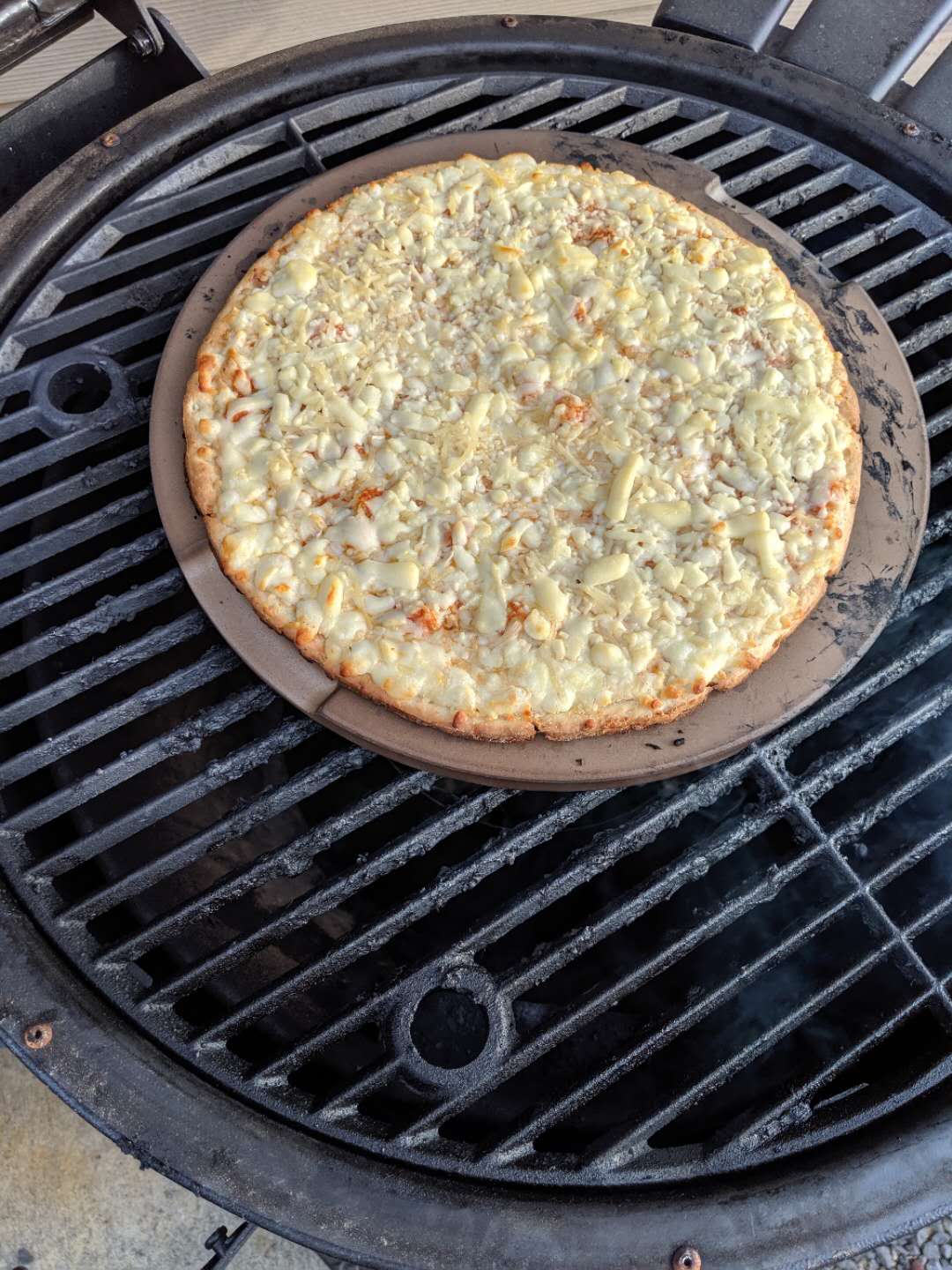 It took 7 minutes to cook the top to brown but the bottom is charred. 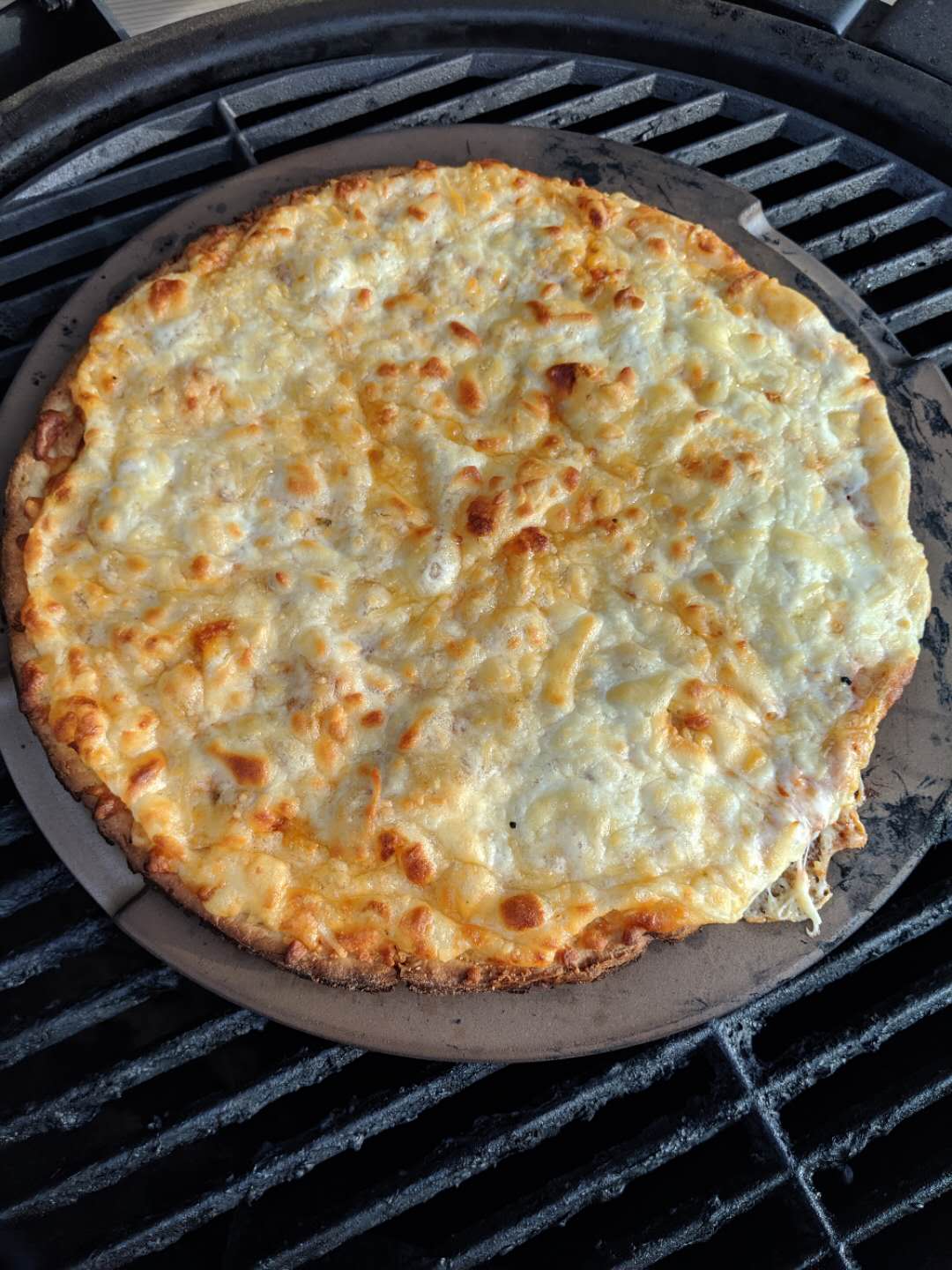 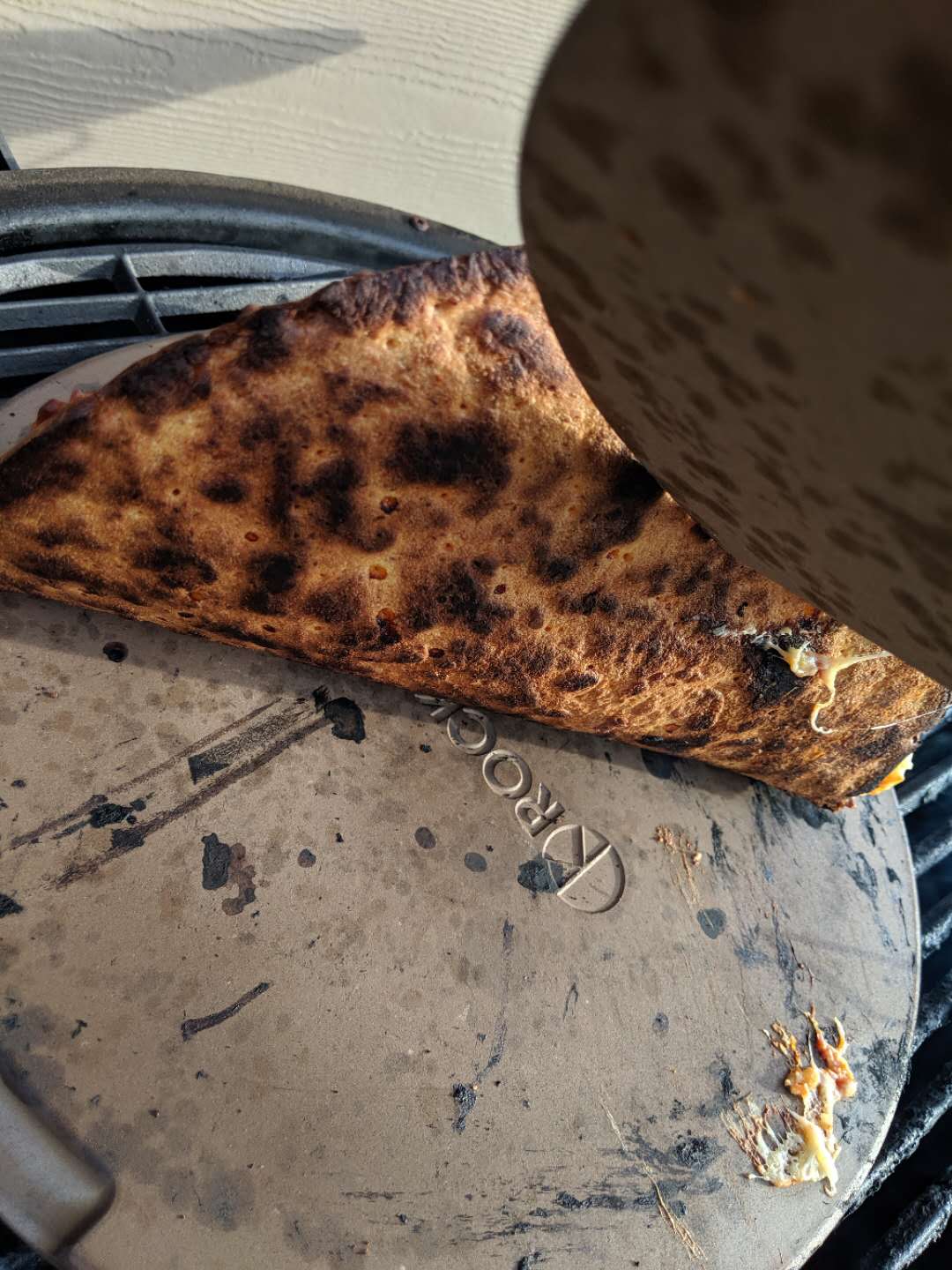 If I've used our Kamado Pizza Ring for Akorn, I could've lifted it up with a peeler after 4th minutes, or when the bottom is done. But for the purpose of this comparison test we left it on the stone. Now below is the 2nd pizza that was cooked at 450 degrees, with much satisfying results. 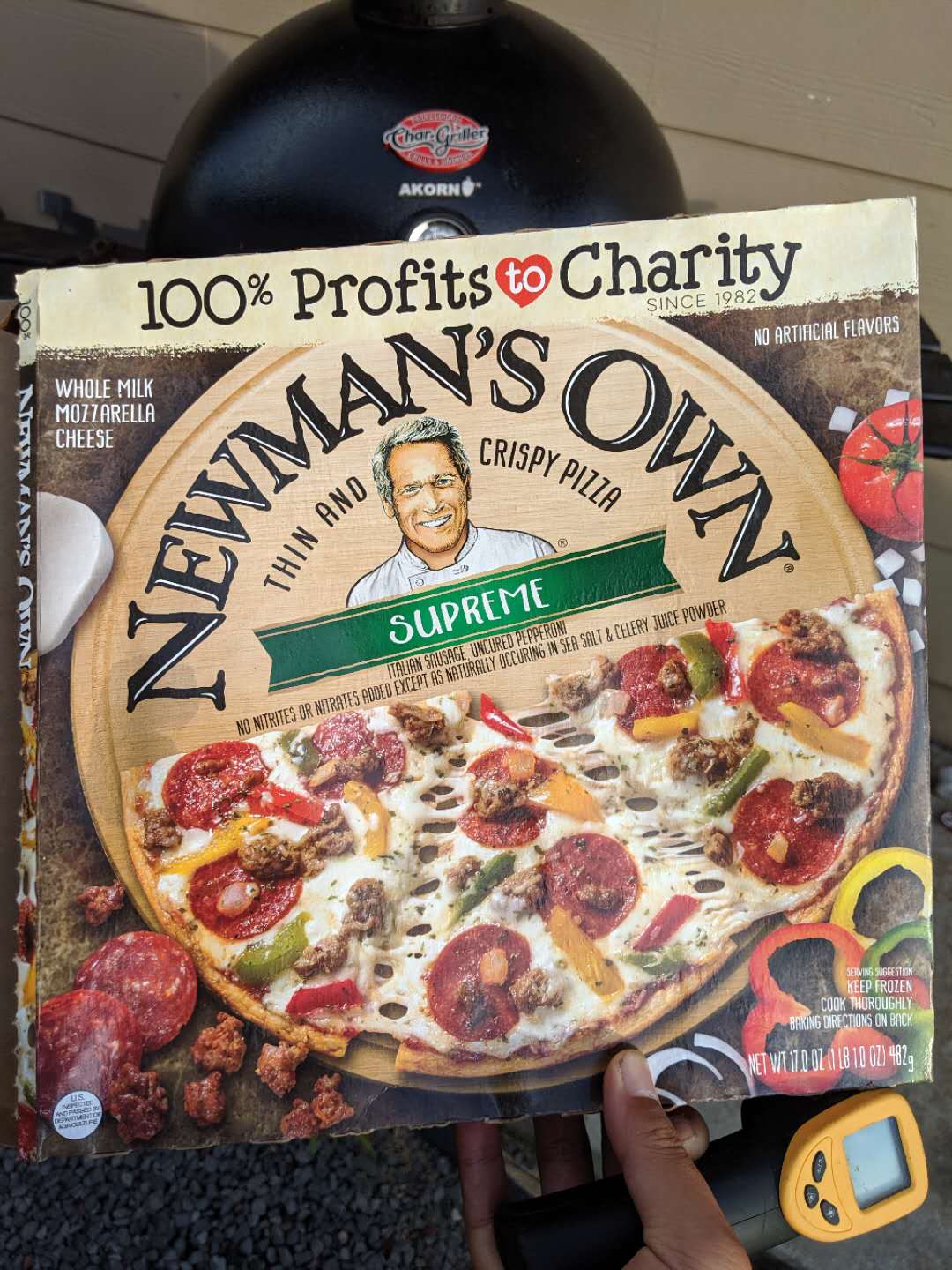 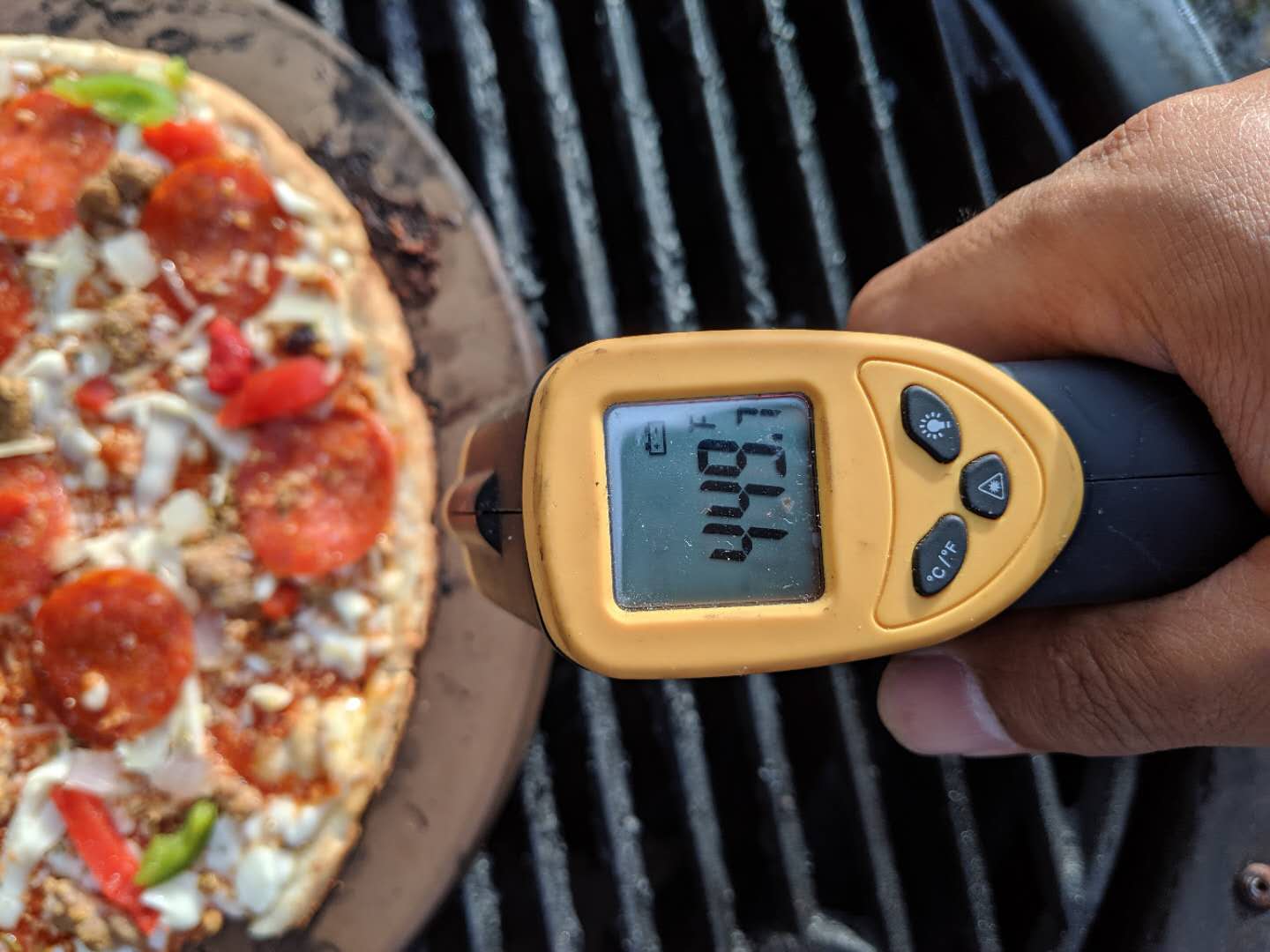 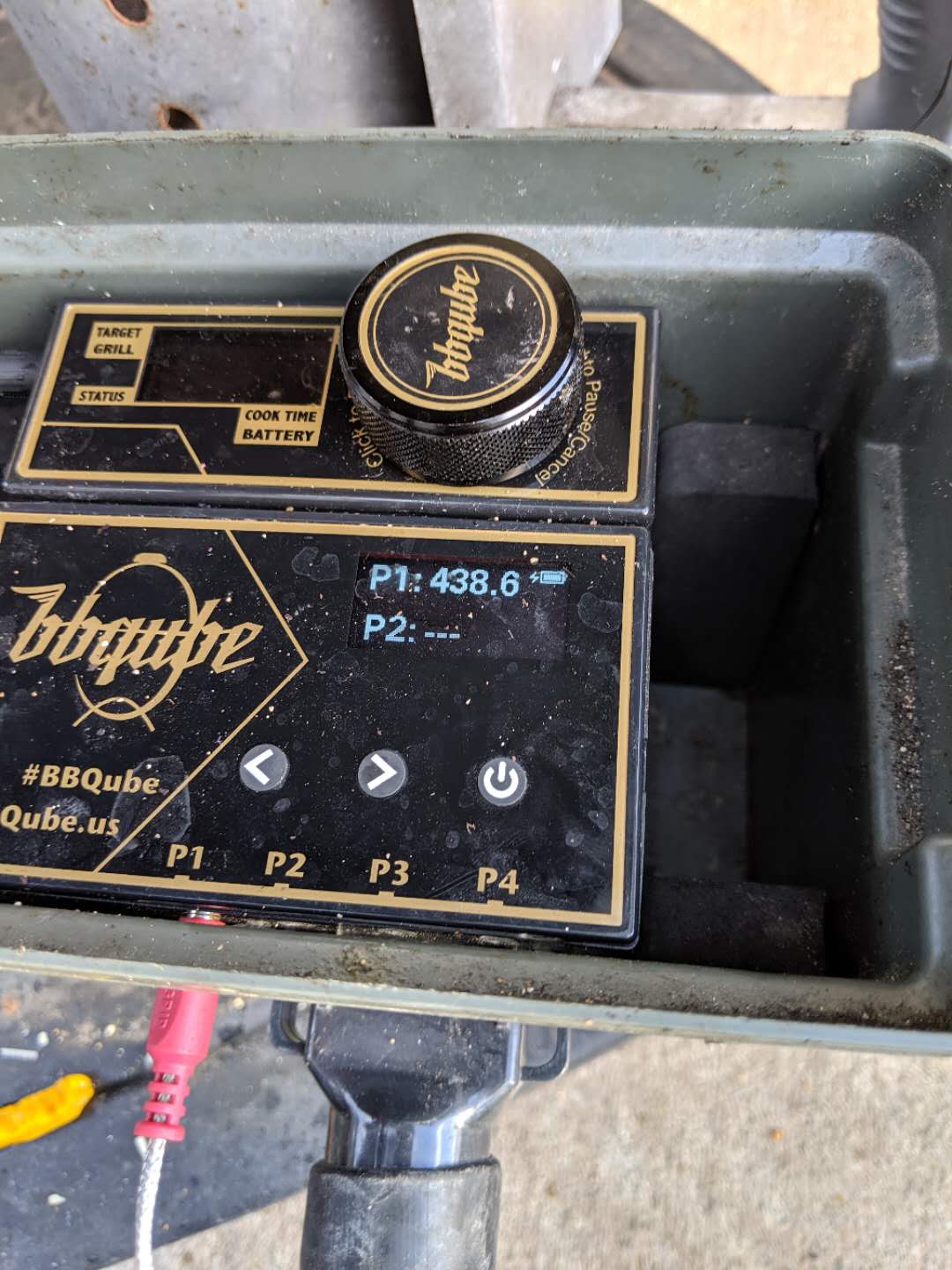 Pizza was cooked properly both bottom and top within 10 minutes. Stone and Grill were both kept at 450 degrees. 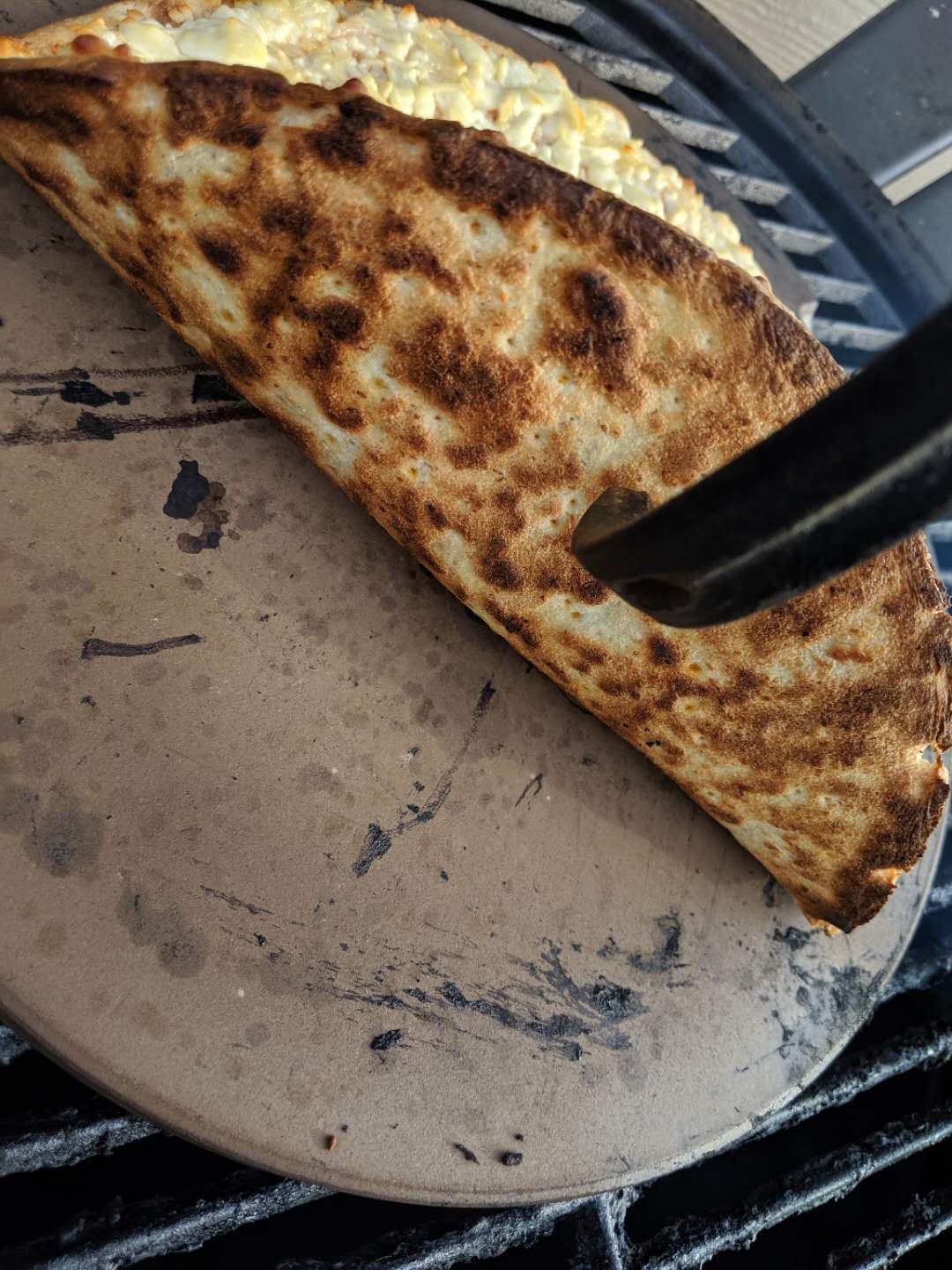 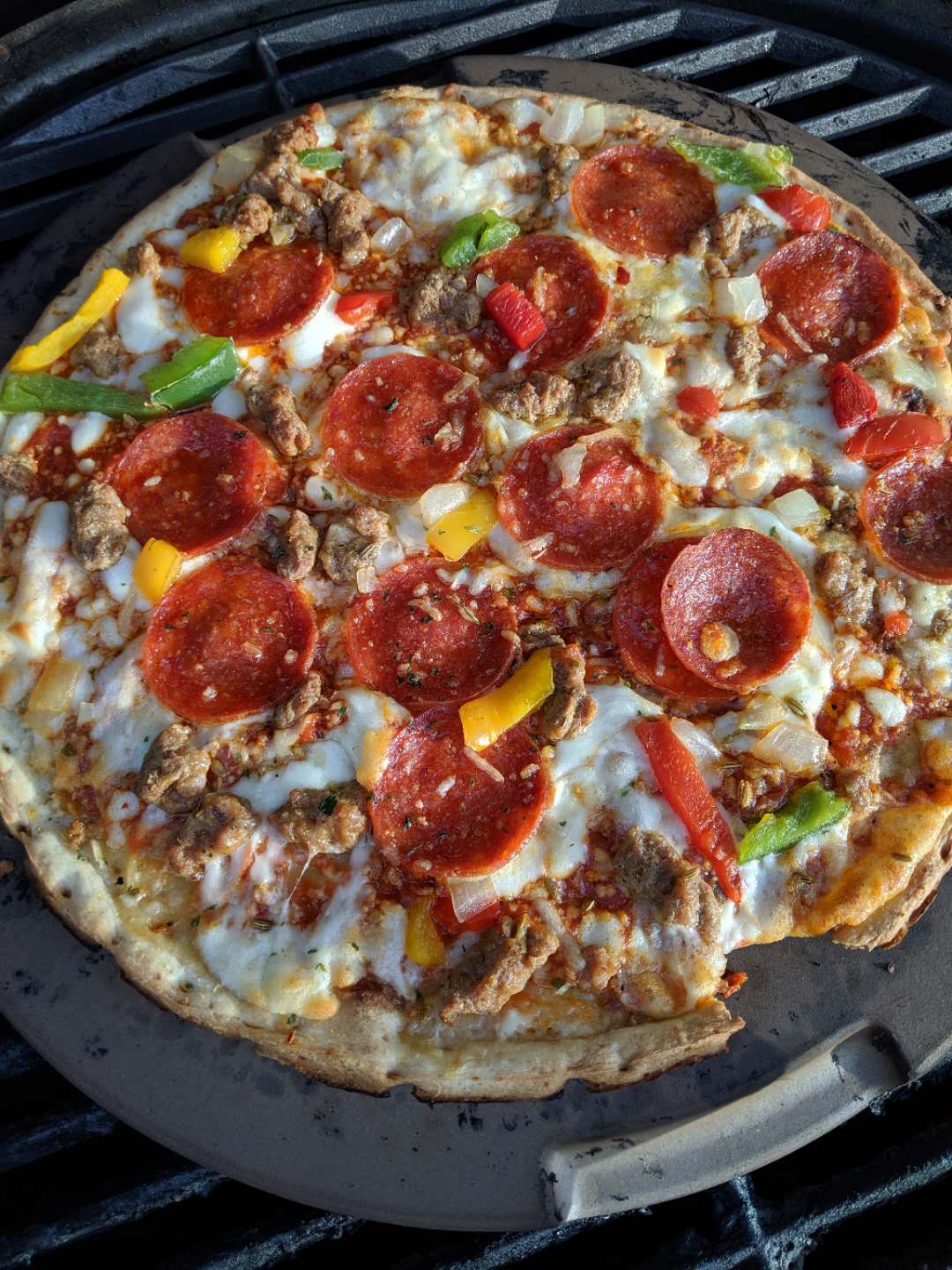 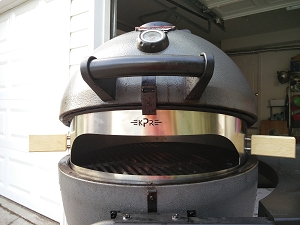